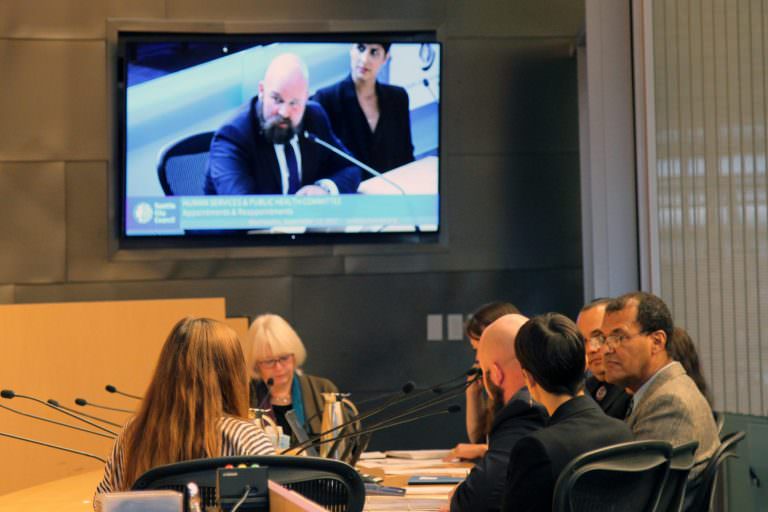 On September 13, our Adam Alsobrook was confirmed as the newest Pioneer Square Preservation Board Member in the capacity of Architectural Historian.

Established as both a National historic district and a local preservation district in 1970, Pioneer Square is protected by an ordinance and design guidelines focused on preserving its unique historic and architectural character, assuring the sensitive rehabilitation of buildings, promoting development of residential uses for all income levels, and enhancing the district’s economic climate for residents, employers, workers, and visitors. Considered to be Seattle’s original downtown and dating back to 1852, Pioneer Square was rebuilt after the devastating “Great Fire” of 1889 and is characterized by late nineteenth-century brick and stone buildings and one of the nation’s best surviving collections of Romanesque Revival style urban architecture. “It’s a tremendous place without parallel that deserves a careful approach to its continued preservation, its history, and the interpretation of its history,” Alsobrook noted in his confirmation.

Pioneer Square is characterized by lower brick and stone buildings, tree-lined streets and avenues, cobblestone parks, and diverse street-level retail establishments and restaurants, all contributing to the neighborhood’s warm and intimate feel. It exists through the efforts of visionary architects, community leaders, and City officials who, in the late 1960s and 1970s fought to save the historic buildings from imminent demolition in the name of urban renewal. “Upon recently earning my architectural license, I felt that it was important to give back to the community and as a resident of Seattle for 3 years, it’s a very rare opportunity to be involved with such a historically significant place in the United States. I couldn’t be more honored.”

Today the Pioneer Square Preservation Board’s tireless work ensures that the city, property and business owners benefit from the tourists and shoppers attracted to Pioneer Square by the neighborhood’s historic and architectural character. Adam will serve a 3-year term.